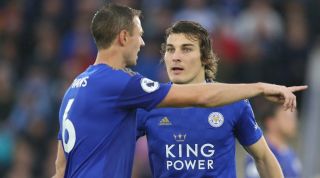 Soyuncu has impressed in the Foxes backline this season alongside Jonny Evans, helping Brendan Rodgers’ side achieve the best defensive record in the Premier League.

After 13 rounds, Leicester are second in the table with just eight goals conceded – despite losing star defender Harry Maguire to Manchester United over the summer.

The form of the Turkey international has resulted in links with the likes of Man City and Galatasaray.

However, Brendan Rodgers has insisted that none of his key men will be heading for the exit in January, and his comments were backed up by Soyuncu’s agent Mustafa Dogru.

“After such performances in the Premier League, it is quite natural for transfer news to appear,” he told Radyospor (via the Leicester Mercury).

“I don't know what's going on in the future, but he's thinking about his achievements at Leicester City and with the national team.”

However, he’s played every minute of Leicester’s superb campaign so far and scored his first goal for the club against Crystal Palace at the start of November.

Leicester are eight points behind leaders Liverpool, while they hold a one-point advantage over Manchester City in third.

QUIZ! Can you name the top 32 all-time English goalscorers in the Champions League?