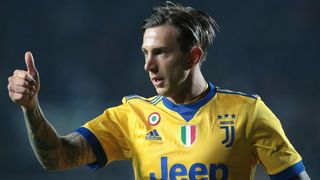 Federico Bernardeschi scored the winner for Juventus as the Serie A champions escaped with a 1-0 victory from an enthralling Serie A clash with Cagliari, while Paulo Dybala left the field in tears with a hamstring injury.

Bernardeschi touched home a squared Douglas Costa pass to claim the three points with 16 minutes remaining, despite the protestations of Cagliari who felt a free-kick should have been given for a Medhi Benatia elbow on Leonardo Pavoletti.

An action-packed first half saw Dybala strike the crossbar and Bernardeschi hit the post, before Benatia was ruled offside having appeared to put the visitors in front.

Pavoletti was a thorn in Juve's side throughout and brought the best out of Wojciech Szczesny on two separate occasions.

Dybala's match was over in the 50th minute when he pulled up with a hamstring problem, while Sami Khedira was also forced off after taking an inadvertent heavy blow to the head from Szczesny in another concerning development for Massimiliano Allegri.

But Bernardeschi helped ensure there was something for Juve to celebrate when he netted decisively to ensure the visitors closed back within a point of Serie A leaders Napoli, who beat Verona 2-0 earlier on Saturday.

Juventus started strongly and could have taken the lead when a curling Dybala free-kick bounced agonisingly off the top of the crossbar after nine minutes.

The visitors continued to put the woodwork through its paces as a fierce Bernardeschi strike rattled the left-hand upright eight minutes later, before Benatia looked to have fired Juve in front.

The defender turned in a Miralem Pjanic delivery but was thwarted by a marginal offside call.

Cagliari's attacking threat was limited by comparison but Allegri had Szczesny to thank for keeping the score level, the Pole getting down brilliantly to his right to pull off a spectacular save from a close-range Pavoletti header.

Blaise Matuidi appeared irked by a section of the home fans before picking up the game's first booking for a clumsy lunge on Nicolo Barella, and Szczesny was again required to keep out Pavoletti by touching his low drive onto the post shortly before the break.

First half action from the Sardegna Arena January 6, 2018

Cagliari – and more specifically Pavoletti – carried their momentum into the second half, with the striker directing a looping header just off target almost immediately after the restart.

Juve were dealt a blow when Dybala pulled up and the Argentina international was visibly upset as he walked from the field, but replacement Costa soon went close with a curling strike that dipped just too late.

Szczesny then collided with Khedira's head as he rose to meet a cross, forcing the midfielder off, and Giorgio Chiellini sustained a nasty cut to the forehead – the captain able to carry on after being bandaged up.

Cagliari's frustration at Bernardeschi's strike was clear and they were even more enraged when referee Gianpaolo Calvarese opted against the use of VAR when turning down penalty calls for handball against the matchwinner.

Juve will be grateful to have salvaged the win - Allegri's 100th with the club in Serie A - from this fixture, but they will be holding their breath over the fitness of Dybala and Khedira as they continue their quest to chase down Napoli.