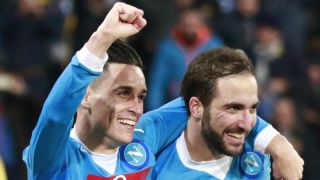 Jose Callejon does not believe Gonzalo Higuain is seeking a move away from Napoli, with the forward hopeful his in-demand team-mate will stay put.

Higuain topped Serie A's goalscoring charts last term and the Argentina international has since been linked with a move away from Naples, Italian champions Juventus emerging as a shock destination.

Napoli have quashed reports linking the 28-year-old, who has two years remaining on his contract, to Juve and Spaniard Callejon is determined to see Higuain continue in Naples in 2016-17.

"I want him to stay here at Napoli," Callejon said.

"I have played with him for the last three seasons, two at Napoli and one at Real Madrid, and I now have a strong relationship with him.

"I have not heard anything from Higuain that he wants to leave. A lot of the news at this time of year is just mere speculation. It would be a shame if he is not with us next season."

Higuain scored 36 goals in Serie A last season - 17 more than any other player as Napoli finished second behind Juve.