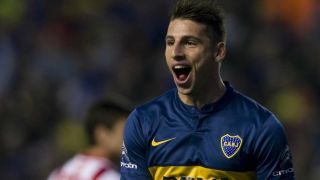 Serie A high-flyers Inter have been interested in the 22-year-old for several months and are set to land the highly-rated striker in the January transfer period.

Angelici said the negotiations are at an advanced stage, but it is unclear whether Calleri will join the Italian's immediately.

"For Calleri we are asking for all of the documentation that UIF needs for the origin of money," he said.

"The negotiations are very advanced and this week we will close the deal."

Inter may loan Calleri back to Boca for another six months, or fellow Serie A club Bologna.

"The decision is of [Calleri] if he wants to go now or mid-way through the year. The club he will be going to want him in June. He could play these six months in Bologna as well," Angelici added.

"There will be a decision if he stays in Boca or goes to Europe."