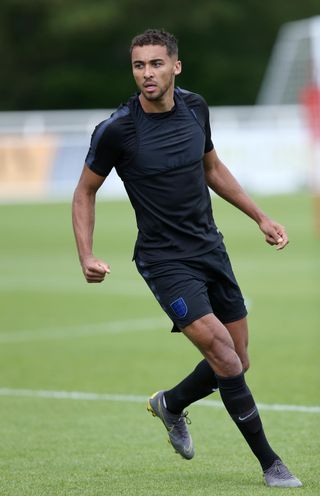 Everton’s Dominic Calvert-Lewin is taking inspiration from Liverpool’s Champions League heroics in a bid to save England Under-21s’ Euro 2019 hopes.

The striker will start in Friday’s must-win Group C game with Romania in Italy after being a substitute in the late opening defeat to France.

The 10-man Young Lions conceded twice at the death after Hamza Choudhury’s red card, with Aaron Wan-Bissaka’s injury-time own goal condemning them to a damaging defeat.

But Calvert-Lewin is prepared to channel the Champions League semi-final comebacks of Liverpool and Tottenham against Barcelona and Ajax to help England.

“Of course, now more than ever, when you’ve got things like that happening in the Champions League and Europa League and in the seniors as well,” he said.

“Every English player wants to be a part of what we are doing at the moment. There is no better time to be an English footballer in my opinion, playing in the Premier League especially.

“We have to take inspiration from what we can. We are aware of where we are and where we sit in the group and the task at hand.

“But the plan doesn’t change. We have full confidence that we can achieve what we want to achieve.

“If it’s not in our hands at the end of the group then it’s not. We have to take care of what we can take care of.”

Only the three group winners and best runners up will reach the last four and the final place could come down to goal difference.

England scored with their only shot on target – from Phil Foden’s fabulous solo goal – against France and Calvert-Lewin knows they need to be clinical in Cesena.

“There’s a good chance it will (come down to goal difference) and there’s no point ignoring that and being oblivious to it,” he said.

“We are aware of it but it’s not a question of going into the game thinking we need to score as many goals as we can. It is just one goal after another.

“We get the first and then carry on what we are doing to get the next one. There is no point putting added pressure on ourselves to try and win 4, 5, 6-0 because that might be unrealistic.

“For us to win the game with the ability we’ve got in the squad is a realistic aim in my opinion. We go in there to win.”