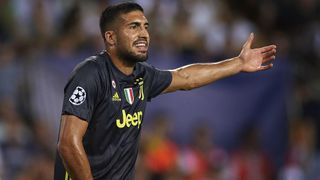 Juventus' Emre Can has apologised for comments he made in the aftermath of Cristiano Ronaldo's sending off against Valencia.

Ronaldo came together with Jeison Murillo off the ball in the Champions League clash on Wednesday, with the Juve star appearing to pull at the defender's hair.

Referee Felix Brych showed Ronaldo a straight red card in the 29th minute, and Can - who ultimately helped Juve to a 2-0 victory - told DAZN: "That's supposed to be a red?

"I just heard he said it was because of hair pulling. We're not women, we're playing football."

Can's comment led to accusations of sexism on social media, with some users even calling for the Germany international to be banned, but the former Liverpool midfielder has claimed there was no intention to degrade women.

"I would like to state that the comments made were never focused nor meant to degrade women, women's football or equality in any form," Can wrote in a statement shared on Twitter.

I would like to take a moment to clear the air regarding comments I made after last nights game.Please read the full statement belowYoursEmre September 20, 2018

"Everyone who knows me knows about my respect for women, equality and respect.

"My intention was to stick up for my team mate regarding a wrong decision which could have affected our game. I sincerely apologise if any of the comments I made have caused any harm."