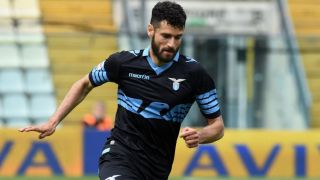 Antonio Candreva has asked to leave Lazio, the club's sporting director Igli Tare has revealed, with the Italy international's agent indicating a move to Napoli may be imminent.

The midfielder, who can also operate as a wing-back, is discussing terms with last season's Serie A runners-up after returning from Euro 2016 duty, agent Federico Pastorello said.

Tare announced Candreva has requested a transfer from the Stadio Olimpico, with a new signing already lined up by the club.

"With regards to Candreva, he has asked to leave and we've already secured a replacement if he does go," he told reporters.

Inter and Chelsea were among the other clubs interested in signing Candreva, who scored 10 goals in 30 league games last season, but Napoli are in pole position.

New Lazio coach Simone Inzaghi, who was appointed after Marcelo Bielsa reneged on a deal to join the club, confirmed Candreva wants to leave.

"He had seven good games with me, but then there are other needs," Inzaghi said.