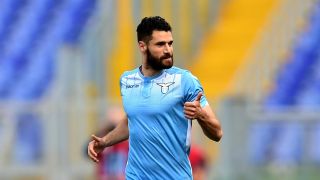 Napoli have reached an agreement with Lazio for Antonio Candreva and the player is keen to move to Stadio San Paolo, according to his agent.

The Italy international has been heavily linked with a transfer away from the capital, with Chelsea and Inter among the clubs reported to be chasing his signature.

Lazio president Claudio Lotito claimed that talks were "at an advanced stage" on Friday, with Napoli reported to have lodged a bid worth close to €25million.

The 29-year-old's agent, Federico Pastorello, says he is tempted by the prospect of playing for Maurizio Sarri's side but would not give any guarantees as they attempt to negotiate personal terms.

"We only found out that Lazio and Napoli have an agreement on Thursday, and the player likes the destination," he told Mediaset Premium.

"We've now made our request for personal terms and will see what happens, taking into account that there are other negotiations from before."