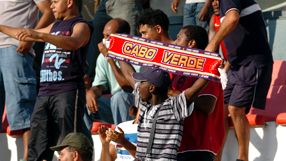 The Portuguese-speaking country's elimination of the four-times winners in Sunday's final qualifying round ranks as one of the biggest shocks in the tournament's history but it has been on the cards in recent years.

Just 10 years ago the 'Tubaroes Azul' (Blue Sharks) beat Mauritania 2-0 at home to record their first win in a competitive international and now they are ranked 51st in the world.

"There was a conscious decision by the federation to embark on a project that would pursue the top talent available and after many years of hard work this has now come to pass," said Joao de Deus, coach of Portuguese second division club Oliveirense, who was in charge of Cape Verde in 2008 and 2009.

By tapping into a large number of descendants of migrants who have been steadily leaving the island archipelago over the last century, Cape Verde football's ability far exceeds the country's 500,000-strong population.

"We now have some 90 percent of our squad members who are playing at clubs in Europe, in Portugal, France, Spain, Holland and other countries," coach Lucio Antunes said in a recent telephone interview.

"These are professional players who are desperate to show what they can do at the Nations Cup finals. It has been so easy to work with them because of their experience and their desire," he added.

But while almost all of Cape Verde's players are drawn from overseas clubs, there remains a fairytale element to the way they have gone from novices to Nations Cup qualifiers in the space of 10 years.

Antunes is on long leave from his job as an air traffic controller and the majority of the squad have no profile outside the Cape Verde. Sunday's goal hero Heldon, from Maritimo in Portugal, and Ryan Mendes of Ligue 1 Lille are among the exceptions.

The Cape Verde, more desert than tropical and situated off the west coast of Africa, won independence in the mid-70s from Portugal but did not play an international until more than a decade later.

They have been FIFA members since only 1986 and did not enter the Nations Cup or World Cup qualifiers until 1992 - two years after Cameroon became the first African country to reach the World Cup quarter-finals.

But on Sunday they looked consummate veterans of the international circuit, toying at times with their Cameroonian hosts as they advanced to January's finals in South Africa 3-2 on aggregate over two legs.