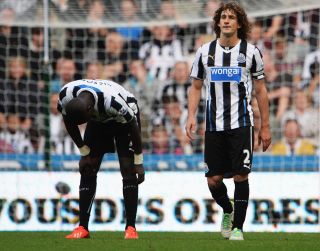 The defender withdrew from the Argentina squad earlier this week with the problem and manager Alan Pardew has ruled him out of the St. James' Park fixture.

The news will come as a blow to Newcastle, who will be keen to avoid a repeat of the 6-0 thrashing they suffered the last time the two sides met in April.

Pardew said on Thursday: "We have had an injury to 'Colo' and he won't feature this weekend.

"It is disappointing. We will see how it goes in the next few days."

Pardew, who must now choose between Mike Williamson, Steven Taylor and Mapou Yanga-Mbiwa at the centre of defence, added: "We should be able to cope."

Newcastle will also have to make do without winger Jonas Gutierrez, who has returned to his native Argentina for personal reasons.