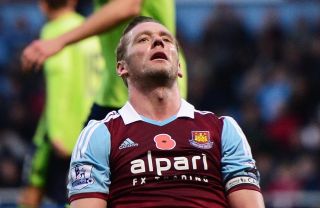 A run of four straight defeats has seen West Ham slip to 14th in the Premier League after a mid-season resurgence had offered hope of a top-10 finish.

Sections of the West Ham faithful have vented their frustrations at manager Sam Allardyce in recent weeks, with some calls for the 59-year-old to be sacked.

Midfielder Nolan wants the club's fans to get behind the team, but is sympathetic towards them.

"Of course (we understand), because we're nervous as well," Nolan told the club's official website.

"We need them to be as much behind us as we are behind them. We understand that they have their own opinions and they are entitled to them.

"They pay to come and watch us. You have to take that as a footballer."

Despite the change in fortunes, Nolan refutes suggestions that West Ham became complacent in the hunt for a top-half finish.

He added: "It's just been a difficult time. Three of the last four games we definitely didn't deserve to lose, but that's just the way the cookie crumbles.

"Last year, sometimes we won games we didn't deserve to win, but this season it hasn't happened like that. We haven't had those lucky escapes.

"We've lost games we have deserved to win, but we've not really scrapped out those results and got them when we haven't played to our best."