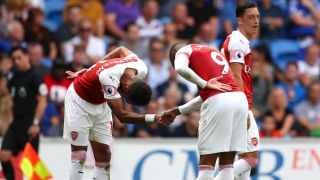 Pierre-Emerick Aubameyang and Alexandre Lacazette's burgeoning strike partnership came to the rescue as Arsenal eventually shook off Cardiff City to claim a 3-2 win in the Welsh capital.

Shkodran Mustafi headed the visitors into an 11th-minute lead before Neil Warnock's side averted a seventh consecutive goalless half in the Premier League this season when Victor Camarasa pounced in stoppage time.

Unai Emery brought Mesut Ozil and Lacazette into his XI and both were involved in Aubameyang's brilliant 62nd-minute goal, only for Danny Ward to find a swift response.

Lacazette was harshly adjudged to have fouled Harry Arter for the free-kick that led to Ward's leveller but the French striker had the last laugh on his first start of the campaign, darting around Sol Bamba and blasting beyond Neil Etheridge at the Cardiff goalkeeper's near post.

Cardiff rued Arter firing over after Petr Cech passed the ball straight to him in the eighth minute, with Mustafi allowed space to power in Granit Xhaka's corner.

Etheridge was out quickly to prevent Nacho Monreal from doubling Arsenal's lead and Lacazette sent a low shot skidding against the base of the post.

Camarasa was fortunate to see the ball fall his way, having failed to control Joe Bennett's cross, but steered home unerringly.

A frequently scrappy encounter enjoyed a moment of stunning quality after the hour and all Arsenal's star attackers were involved.

Lacazette flicked Ozil's pass into Aubameyang's path and the ex-Borussia Dortmund star curled a wonderful effort across Etheridge from 25 yards.

It was not enough to dissuade Cardiff, however, and Ward expertly guided Sean Morrison's header back across goal in off the post with 20 minutes to play.

Bobby Reid lost his footing when an improbable Cardiff victory beckoned; Lacazette had no such troubles on the end of substitute Lucas Torreira's 81st-minute pass.