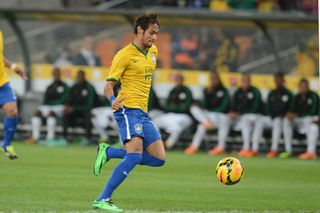 Neymar has been the centre of several controversies off the field this term over his €57.1 million close-season move from Santos.

On the pitch, however, the Brazil international has contributed nine goals in 25 La Liga appearances and continues to shine for the national side.

Current Sivasspor coach Carlos - who was a star for Barca's rivals Real Madrid during his playing career - has predicted Brazil will flourish on home soil when the FIFA World Cup takes place later this year.

And he fully expects Neymar to excel on football's biggest stage, having impressed during last year's FIFA Confederations Cup.

He told Sport Bild: "Not only do Brazil have the advantage of playing at home but also (head coach) Felipe Scolari has changed the way of playing.

"We saw that when Brazil won the Confederations Cup in 2013.

"Neymar is a genius and will be a key player at the World Cup.

"What is striking about him is his character. You always need players with good judgement and confidence on the pitch."