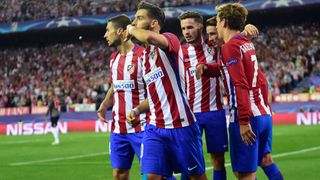 Atletico Madrid winger Yannick Ferreira Carrasco is eager to sign a new contract to keep him at the club beyond 2020.

The Belgium international, who joined from Monaco in July 2015, has established himself as a key component of Diego Simeone's side and scored his first goal of the season to give Atletico a 1-0 Champions League win over Bayern Munich last month.

Reports in England have suggested Chelsea are keen to strike a deal to sign the 23-year-old, who is understood to have a release clause of close to €40million in his contract.

But Carrasco claimed he has no interest in offers from elsewhere and wants to prolong his stay with Atleti beyond the expiry of his deal.

"I'm already here until 2020 and hopefully I can be here longer," he said. "I'm really happy at Atleti.

"I've been really well received at the club. When I score goals and when I play well, the fans chant my name, and I hope that continues.

"I work to be a starter and it's the boss who has to choose. We're looking at things game by game and we work hard."