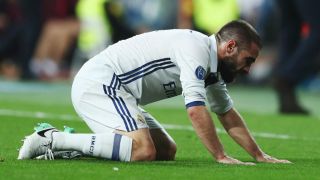 Carvajal limped off during first-half stoppage time at the Santiago Bernabeu and subsequent tests revealed a grade two tear to his right hamstring.

Madrid did not put a time frame on his absence but the Spain right-back is at risk of missing the rest of the season, with Zinedine Zidane's side aiming to complete a LaLiga and Champions League double.

The Champions League final is on June 3 in Cardiff and could represent a target for Carvajal's return.

The 25-year-old has made 40 appearances in all competitions for Madrid this term.