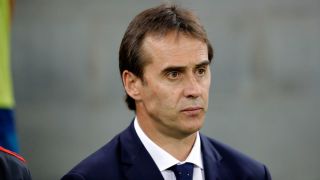 Dani Carvajal has high hopes for life under new Real Madrid coach Julen Lopetegui, who he believes always gets the best out of his teams.

Zinedine Zidane led the club to a third consecutive Champions League crown last term and ultimately decided to step down soon after, suggesting he would not be able maintain the team's successes.

Lopetegui was announced as Madrid's new coach just prior to the World Cup, a situation which resulted in his sacking by Spain two days before their Russia 2018 campaign started.

Carvajal is no stranger to Lopetegui, having worked under him with Spain's Under-19s, U21s and senior side.

And he is confident Lopetegui is a smart choice to replace Zidane.

"I have always enjoyed Lopetegui," Carvajal told El Grafico. "I share his ideas of football and he is a coach who gets the most out of each player.

"He is going to do us well and I am already anxious to put myself at his orders. The bar is now very high but we have to have patience."

Madrid head into the new season with an element of uncertainty, having lost both Zidane and Cristiano Ronaldo, who left for Juventus this month.

But Carvajal was keen to highlight their team spirit, something he believes has been vital for their successes.

"We all get along well," he added. "I think that is key for success. It's practically a family and that makes everything easier on the pitch.

"The pressure at Real Madrid is always there and you learn to live with that. We enter [training] every day and share [the pitch] with the best in the world – it's amazing.

"I think the good atmosphere has been fundamental for things to go well."