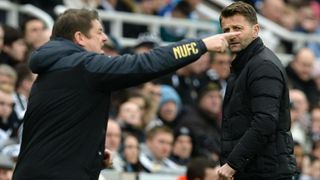 Despite being put under large amounts of pressure by Tim Sherwood's visitors in the opening stages at St James' Park, it was the hosts who took the lead thanks to Papiss Cisse's 11th goal of the campaign.

And Carver, who also welcomed Jonas Gutierrez back to the match-day squad after the Argentine's recovery from testicular cancer, believes his side showed their character after their humiliating 5-0 defeat at Manchester City last time out.

"We got a battling response. It wasn't scintillating football but it was two nervous sides," he said.

"Villa are fighting for survival and we were trying to get off that 32-point mark because people are talking about our season fizzling out.

"What you saw wasn't a great passing or team performance, but it was a battling performance."

Newcastle barely created a chance in the first half, but were ahead after 37 minutes when Cisse struck home from Daryl Janmaat's cross.

Though Villa pressed hard for a leveller after the interval – with Christian Benteke a menace up top – the hosts held strong to secure their first victory in four matches.

"I'm not bothered if it's an ugly win – and it was – because people doubted us after last week," added Carver.

"I took a bit of a gamble in playing two wingers and two strikers, but what I did say is that if we got it in the box we've got Papiss Cisse who'll put it away.

"Today is proof that we've got a group in the dressing room who are honest and hard working and even when they're not playing well they'll still give their all."