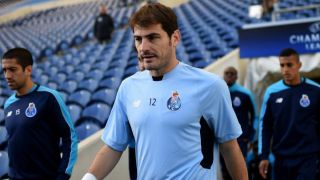 Iker Casillas refused to dismiss the possibility of playing in MLS, though he intends to see out his Porto contract.

Casillas is enjoying life in Portugal's Primeira Liga after ending his 25-year association with Real Madrid in July.

The 34-year-old Spain international signed a two-year contract with the option of a third and while he is happy in Porto, a move to the United States is of interest.

Responding to a question in a live Q&A session via his official Facebook page, Casillas said: "The game has grown a lot over there and that's brilliant to see ... Would I play there? Why not?"

Casillas added: "I've signed for three seasons here and I intend to complete my contract here.

"Porto is a new challenge for me and I hope I can live up to the expectations at this great club."

Casillas has only conceded four goals in 10 Primeira Liga matches for second-placed Porto this season, while the veteran has helped the Portuguese giants to second spot in Champions League Group G.