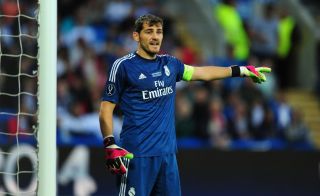 The identity of Real's number-one goalkeeper for the upcoming campaign has been a hotly debated topic in pre-season, with Costa Rica international Keylor Navas arriving from Levante for a reported €10 million fee earlier this month.

Diego Lopez, who was Real's first choice in La Liga last term, subsequently departed for Milan leaving a direct battle between club stalwart Casillas and Navas for a starting berth.

"I have not decided the starting line-up yet, but Casillas will be a starter tomorrow," Ancelotti said at his pre-match news conference.

"There could be changes in goal in Friday's game [for the return leg]."

Ancelotti also faced questions on the future of Angel di Maria, who has once more been linked with a move to Premier League side Manchester United.

However, the Italian refused to be drawn on the issue, adding: "I will not go into the subject of Di Maria. [He] is ready for tomorrow's game."