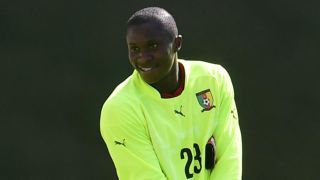 Sammy Ndjock became an internet sensation with a scarcely believable howler against Bournemouth, but Minnesota United have jokingly blamed jam for the goalkeeper's sticky situation.

Ndjock inexplicably threw the ball into his own goal during Minnesota's 4-0 friendly loss against Premier League side Bournemouth on Wednesday, with the video of the incident unsurprisingly going viral across the internet.

But while the calamitous throw left the Cameroon goalkeeper with egg on his face, Minnesota released a spoof video on Twitter that explained jam on Ndjock's gloves was behind his gaffe.

The video shows head coach Carl Craig giving a pre-match team talk to his side during which Ndjock is shown eating a jam - known as jelly in the United States - sandwich that is smeared on his gloves, and is accompanied by the hashtag #BlameItOnTheJelly.

Ndjock will certainly hope the humorous video gets him out of a jam.