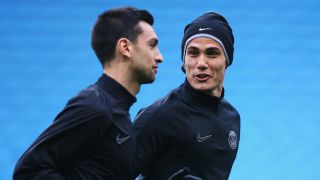 Edinson Cavani and Javier Pastore have been told to explain their late return from Paris Saint-Germain's mid-season break.

Top-scorer Cavani, who has 19 league goals to his name this season, and midfielder Pastore failed to return to training on time ahead of a busy week that sees PSG face Rennes in the Coupe de France on Sunday before Wednesday's Coupe de la Ligue tie with Amiens.

Head coach Unai Emery will allow Cavani and Pastore the chance to explain their tardiness, but did not rule out the possibility of sanctioning the duo.

"Both players are late. I will listen to both players when they will have to make a justification about this," he told a news conference.

"Cavani? He may be here today maybe, I don't know. I will talk with Cavani and Pastore, the club as well.

"Then we will see. They both said on Wednesday that they will be late."

PSG are nine points clear of Monaco at the top of Ligue 1 after 19 matches.