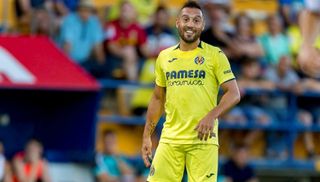 Former Arsenal midfielder Santi Cazorla has admitted he is still playing through the pain after being given a pre-season run-out for Villarreal.

The 33-year-old came on as a substitute in a 1-1 draw with Hercules on Tuesday, making his first appearance since October 2016.

Cazorla's six-year spell at Emirates Stadium came to an end at the conclusion of 2017-18, after a series of debilitating injuries kept him on the sidelines.

However, the Spain international admitted after the match that he did not enjoy his appearance, and will not feel like a footballer until his health improves.

"I am only thinking about getting rid of the pain as soon as possible because I am not enjoying what I am doing," Cazorla told Marca.

"I want to train with my colleagues again and to feel like a footballer. It is hard to express what it feels like to be out on the pitch after so much time.

"To feel like a footballer again, to feel the love of the people and the reception they gave me."