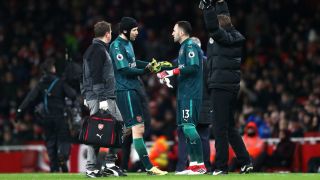 Petr Cech is in danger of missing Arsenal's north London derby clash with Tottenham through injury, Arsene Wenger has confirmed.

The goalkeeper hobbled off in the second half of the Gunners' 5-1 demolition of Everton on Saturday, with Colombian David Ospina replacing him.

Cech received a kick to his calf and, while there are no long-term concerns about his condition, Wenger remains unsure if he will be ready for Saturday's trip to bitter rivals Spurs.

However, Wenger could potentially have both Danny Welbeck (hip) and Nacho Monreal (illness) available for selection once again.

Speaking to reporters on Thursday, Wenger said: "We should have a similar squad to Everton.

"Maybe Danny Welbeck will be back, but we are not sure with Cech. We had a few problems with Cech and he has not practised. I don't know if he should be available. Nacho Monreal should be alright, so it should be a similar squad.

"I've no problem with that [having to make do without Cech]. Ospina or Cech - I'll make my decision tomorrow [Friday]. I will not take any risks if he's not 100 per cent because I've full confidence in Ospina."

The January arrival of Pierre-Emerick Aubameyang has already seen Alexandre Lacazette become second choice, despite Wenger spending a reported £48million on the Frenchman at the start of the season.

Aubameyang starred and scored on his Premier League debut against Everton, while Lacazette sat on the bench, but Wenger is not particularly worried about his compatriot's mindset after getting dropped.

"You do not have to understand too much," Wenger said.

"What you want is for everyone to be focused to win the game. In this game he didn't come on because we had a problem with the goalkeeper. They all want to play."

Like Aubameyang, Henrikh Mkhitaryan has also caught the eye since his arrival and produced a marvellous display against Everton, setting up three goals.

And Wenger acknowledges that new players can give teams a boost, but he wants that impact to be sustained, rather than just a momentary thing.

"It gives a new hope when fresh players come in," he added. "But the most important is the team performance. You want a positive history.

"At the start it [the boost provided by new players] gives you a swing, but after it needs to be backed by performances of the team."