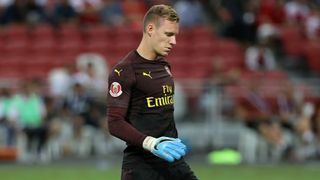 Bernd Leno's eight Bundesliga seasons will count for little in adapting to the Premier League, according to Arsenal team-mate and goalkeeping rival Petr Cech.

Leno, 26, signed from Bayer Leverkusen for a reported £19.2million in June but is yet to learn from head coach Unai Emery whether he will be first choice.

The Germany international is locked in a fight to dislodge Cech, who has been the Gunners' number one for the past three seasons, and the former Chelsea man has warned him not to underestimate the rigours of English football.

"There are so many things that a goalkeeper coming to the Premier League has not experienced in a different league," said Cech, as quoted by The London Evening Standard.

"Obviously you have the physicality and the way the game is played in the Premier League. The goalkeeper is not as protected as in Europe or different leagues.

"So, I think that is something you need to find your way and deal with and obviously the quicker you do it, it is better for you."

Leno – who played against Cech in the Champions League in 2011 – believes working with the four-time Premier League winner can help him settle at Arsenal.

"I will learn a lot working with him every day," Leno said. "He has big experience and played many games. I have a lot of experience too, but he has much more, so I can learn from him.

"He is a goalkeeper I admired when I was growing up. I can remember my first game in the Champions League, when I was 19, was against Petr.

"After the game, he said it was a good game for me. It was seven years ago and now we are together at Arsenal, it’s crazy."