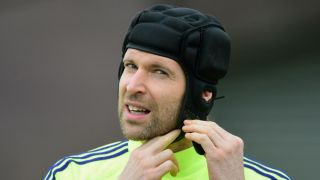 Petr Cech could make his Arsenal bow when Arsene Wenger's men kick off their Barclays Asia Trophy campaign against a Singapore Select XI on Wednesday.

The Czech goalkeeper arrived from London rivals Chelsea for an undisclosed fee at the end of last month and is, so far, the only new addition to the Arsenal first team.

The Emirates Stadium outfit are joined by Everton and Stoke City in contesting the pre-season konockout tournament, which concludes on Saturday.

Neither Arsenal nor Stoke have featured in this competition before, while Everton finished bottom of the pile a decade ago, but manager Wenger has his eyes on the prize.

"A preparation that is not serious does not give you any hope," he is quoted as saying by Arsenal.com. "It's a very serious preparation and we'll take this Barclays Asia Trophy very seriously.

"The players compete for places in the team at this stage of the season as well, so [fans] can be absolutely reassured on that front that it is a serious competition."

Everton - defeated on penalties by Manchester City in the play-off in 2005 - are in action against Stoke in the last four and captain Phil Jagielka expects the fixture to bear the hallmarks of a Premier League fixture.

"There is a trophy and that always adds a bit of extra spice to the games and we're desperate to put on a good performance tomorrow night and hopefully qualify for the final, where we'd expect to play in front of pretty much a capacity crowd," he said.

"Those feelings you don't always get in pre-season around the world so it would be good to turn up here and put two good performances in."

New signings Tom Cleverley and Gerard Deulofeu will look to further their respective bids for a place in Roberto Martinez's first-team plans, while Stoke prepare for life without Asmir Begovic and Steven N'Zonzi.

Begovic departed for Chelsea on Monday, while N'Zonzi has joined Sevilla, but Mark Hughes has been boosted by the arrivals of Shay Given, Glen Johnson and Joselu, all of whom could feature in Singapore.

Stoke, though, will be without defensive pairing Ryan Shawcross and Philipp Wollscheid.

"Both players have been working out here, but they aren't fit and ready for minutes as of yet," Hughes told Stoke City Player. "Ryan has a little bit of trouble with his back, which will hopefully clear up quickly, whilst Philipp has had a bit of stiffness in his hamstring.

"They will both be working with the physio tomorrow, but they won't be involved in any capacity for the game."