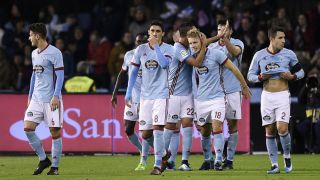 Maxi Gomez scored an 82nd-minute equaliser for Celta Vigo to extend Real Madrid's winless away run in La Liga to four matches in a 2-2 draw at Balaidos.

Defeat at Girona and goalless stalemates at Atletico Madrid and Athletic Bilbao plunged Madrid into worrying run of away form, although a 3-0 home reverse to fierce rivals Barcelona in their last league outing is likely to have given them the bigger headache over the Christmas period.

But Zinedine Zidane's men were unable to break that streak on Sunday, despite the best efforts of Gareth Bale, who scored both of the visitors' goals in his first league start since September following calf and hamstring problems.

Iago Aspas hit the post for Celta before Daniel Wass opened the scoring with a wonderful chipped goal that Cristiano Ronaldo would have been proud of.

But the hosts' lead lasted only three minutes, with Bale netting the leveller before firing Zidane's side in front two minutes later.

Celta were given a golden opportunity to restore parity when Keylor Navas conceded a penalty after 72 minutes, but the Costa Rica international atoned for his error by saving Aspas' spot-kick.

However, there was another chance for Celta to claim a share of the spoils, and Gomez evaded a napping Madrid defence to power home a header eight minutes from time.

The European champions are now on their worst away run in a decade and trail leaders Barcelona by 16 points with only one game in hand.

1 - Maxi Gomez is the only player to score both against Real Madrid and Barcelona in La Liga this season. Courage. January 7, 2018

Bale came close to opening the scoring in the second minute when he failed to get enough purchase on a close-range header.

The former Tottenham man was then on hand to tee up Ronaldo for the first shot on target – a tame effort along the ground two minutes later – before Marcelo skewed a volley well clear of the crossbar.

But Zidane's men almost fell behind after 13 minutes when Aspas drifted between Raphael Varane and Nacho to volley a Hugo Mallo cross against the right-hand post.

Wass should have done better when he fired well wide from a promising position after 25 minutes, but the Denmark international lit up Balaidos with a sublime finish soon after.

The 28-year-old timed his run perfectly to pick up an Aspas throughball and, with Nacho chasing him down and Navas rushing off his line, Wass lifted a delightful chip over the goalkeeper.

Celta's lead was short-lived, however, thanks to two goals in as many minutes from Bale.

Toni Kroos split the home defence with a pass that the Wales international diverted beyond Ruben Blanco for his first, before a well-judged Isco delivery found the net with a flick from Bale.

Casemiro was lucky to escape a red card shortly before the interval when a stray arm caught Mallo in the face, but Celta remained a threat and Jonny fired just over with one of the home side's better attempts at an equaliser.

Ronaldo had a powerful header kept out by Blanco and Madrid's failure to build on their lead looked set to cost them dearly when Navas brought down Aspas in the box.

He escaped a red card for the infringement and dived to his right to keep out Aspas' effort, although the keeper was well off his line when the ball was struck.

Celta felt passionately that Navas should have been sent off for his foul on Aspas but they gained their revenge with Gomez's goal from a Wass cross in the closing stages.

Madrid pushed for the winner and will be left to rue Lucas Vazquez's poor attempt from space in the centre of the box, which was comfortably held by Blanco in the final minute of normal time.