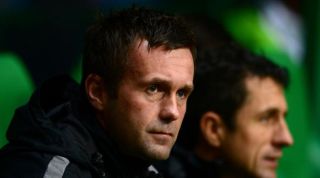 Celtic will retain the Scottish Premiership title should Aberdeen not win on Saturday after their crushing 5-0 defeat of Dundee at Celtic Park on Friday.

A run of seven wins from eight league games has seen Ronny Deila's men open up an eleven-point gap at the summit and if Aberdeen fail to beat Dundee United on Saturday, Celtic will secure the title for a 46th time.

Leigh Griffiths continued his sparkling 2015 form, scoring his 11th league goal since the turn of the year and taking his season tally up to 13, heading in Emilio Izaguirre's fine cross with half-an-hour played.

Former Derby County midfielder Commons added their third from the penalty spot with 19 minutes to go and James Forrest rounded off a lethal counter shortly after.

Nir Bitton completed the rout just before the end, finding the net in stunning fashion via the right-hand post from 30 yards, leaving Celtic within touching distance of a fourth consecutive league title.

Two points from their remaining three games will clinch the title for Celtic, whose next match is a trip to Pittodrie and second-placed Aberdeen on May 10.