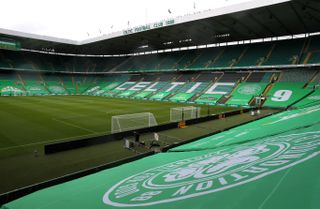 Celtic have been drawn at home again in the second qualifying round of the Champions League.

Neil Lennon’s side are on track to host Hungarian champions Ferencvaros or Swedish title winners Djurgardens.

Celtic were drawn at home against KR Reykjavik on Sunday for their opening qualifier.

That game is due to take place on August 18/19 in Glasgow but there is still a
possibility the fixture could be staged at a neutral venue, if the Icelandic side have any Covid-19-related obstacles getting to Scotland.

🌍 If we progress in the #UCL, we will play either Ferencváros or Djurgården in the @ChampionsLeague second qualifying round.— Celtic Football Club (@CelticFC) August 10, 2020

The second qualifying round is due to take place the following week.

Linfield also discovered who their opponents might be if they pull off a shock win over Legia Warsaw.

The Belfast side are still engaged in the preliminary round having won their first fixture on Saturday, and face Kosovan champions Drita on Tuesday. If they win that, they take on the Poles for the right to host Ararat-Armenia or Cypriot team Omonia.

If we overcome NK Celje in the first qualifying round, we have been drawn at home to either Molde (Norway) or KuPS (Finland) in the second qualifying round of the Champions League. pic.twitter.com/P8I5QxAmWi— DundalkFC (@DundalkFC) August 10, 2020

Dundalk will host Norwegian champions Molde or KuPS of Finland if they triumph away from home against Slovenian side Celje.

The first three qualifying rounds are being played as one-off ties before reverting to two-legged affairs for the play-off round.

Poland, Hungary, Greece and Cyprus have been earmarked as the destinations for any games which might need to be played in neutral venues.