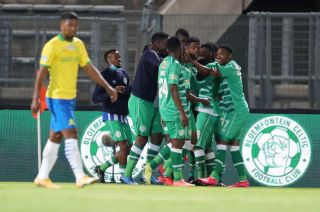 Mamelodi Sundowns were eliminated from the MTN8 after suffering a 1-0 defeat against Bloemfontein Celtic at the Lucas Moripe Stadium on Sunday, writes DYLAN APPOLIS.

Sundowns handed Peter Shalulile, Nyiko Mobie and Haashim Domingo their debuts, while Celtic were without Ndumiso Mabena due to match fitness.

The Brazilians got off to a great start and nearly took the lead in the fifth minute but Ricardo Nascimento’s strike but Jackson Mabokgwane made a great save to deny the defender.

Celtic began to gain momentum as the match went on but were unable to break down Sundowns’ defence.

Sundowns were knocking on the door and came close to taking the lead on the half hour mark Mabokgwane once again came to Celtic’s rescue to deny Gaston Sirino this time round.

Masandawana thought they had taken the lead on the stroke of half time when Shalulile headed the ball home but his goal was disallowed for offside.

Nothing could separate the two sides as the match went into the half time break level at 0-0.

Sundowns came out with intent in the second half as Shalulile threatened Celtic’s goal in the 46th minute but Mabokgwane kept his side in the game to deny Sundowns the opening goal.

Hlompho Kekana should've handed his side the lead in the 57th minute when he found space on the edge of the area to unleash one of his trademark strikes but he could only to rattle the woodwork with a thunderous strike.

Sundowns made their first substitute of the game in the 62nd minute when Domingo was replaced by Kermit Erasmus, who makes his debut for the Brazilians.

Despite Sundowns' dominance, it was Celtic who took the lead six minutes later when Victor Letsoalo found the back of the net from close-range.

The home side made their second substitution in the 72nd minute when Aubrey Modiba came on to make his debut in place of fellow debutant Mobbie.

Sundowns should've levelled matters a minute later as Themba Zwane made his way into the Celtic box after great link up play with Sirino but was unable to find the net as he blazed his effort wide of the target.

Sirino had a chance to level matters with four minutes left to play after he found a pocket of space to unleash a strike but his effort sailed just wide of goal.

The Tshwane giants made a triple substitution in the 88th minute as Sirino, Shalulile, Rivaldo Coetzee was replaced by Keletso Makgalwa, Andile Jali and Sphelele Mkhulise, respectively.

Sundowns pressed forward in the closing stages of the game but were unable to equalise as Celtic held on to their one-goal lead until the final whistle to eliminate the Brazilians to progress to the semi-finals.