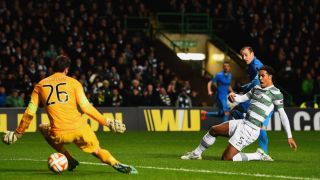 Inter claimed a 3-3 draw in Glasgow last week despite twice giving up their lead but the Milan-based club will be expected to advance to the Europa League's round of 16 as they will host the second leg.

Speaking at his pre-match media conference on Wednesday, Deila warned Celtic they must improve defensively, while he claimed the match at San Siro will be an important audition for Van Dijk, 23, and Denayer, 19.

"These are the most important games for both Virgil and Jason Denayer alongside him to play in," the Norwegian said.

"They can show where they are right now in their career.

"There are a lot of young players on the pitch who haven't played in so many of these games and in this kind of atmosphere.

"I think they will get through it in a good way but they have to play more as a unit in the back four.

"We are looking to reach [UEFA] Champions League level and these games against Inter are like that. We will get good answers about the players and the team.

"There were a lot of positive things for me last Thursday. But the problem was the goals we conceded.

"In the Scottish Premiership, we don't get punished so hard for mistakes, because we have 70 per cent possession in almost every game.

"In Europe, it is more about balance, about offensive marking in the defence instead of allowing someone to have a go at you. It is different and it tells me and the players more about where we have to work to improve."