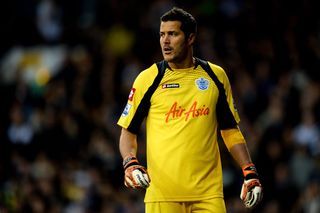 The form of the Brazil international was one of the few positives to take out of a dismal 2012-13 season for the London club, which saw them relegated from the Premier League.

Cesar, 34, was expected to leave Loftus Road following Rangers' drop to the Championship, but a move never materialised.

The former Inter man has made only one appearance for Harry Redknapp's side this season, with Robert Green replacing him as first-choice keeper.

Serie A side Cagliari have been linked with a move for Cesar during the January transfer window and Fernandes expects the experienced custodian to move on.

When asked if Cesar is likely to leave Loftus Road this month, Fernandes told Sky Sports News: "I think so.

"It's a waste for someone with such immense talent not playing and I think he is one of the best goalkeepers in the world, so I'm sure someone will pick him up and let's see how that goes.

"We've gone with Rob (Green) because at the beginning of the season we thought Julio wouldn't be there.

"Rob has come in and done a fantastic job and I think he could be pushing for an England place - he's played really well.

"Just look at the last game (a 2-1 home victory over Huddersfield Town on Saturday). He kept us in the game until we came back and won. He's been superb."