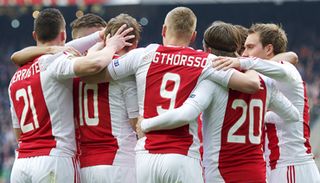 Sigthorsson picked up a pass from Daley Blind after eight minutes to open the scoring as the Groningen defence failed to mark him and 18 minutes before time Hoesen outplayed an opponent outside the box and finished with a well-placed shot.

"This was not our best match and we are glad with the result but it was obvious that the celebrations round our championship had their influence today," Ajax skipper Siem de Jong told Eredivisie Live TV.

Ajax finished with 76 points from 34 matches, while second place PSV Eindhoven followed with 69 despite a 3-1 loss at Twente Enschede, who finish sixth with 62 and join Utrecht, Groningen and Heerenveen in the Europa League play-off berths.

Luc Castaignos and Nacer Chadli earned Twente a two-goal lead before Dries Mertens converted a penalty to pull one back five minutes before the interval.

Willem Janssen secured the result for Twente nine minutes into the second half before Mark van Bommel was sent off following his second booking in his final match before retirement.

Ronald Koeman's Feyenoord finished third, level on points with PSV but with an inferior goal difference after a 1-0 win over NAC Breda, with Graziano Pelle heading home his 27th goal of the season after 59 minutes.