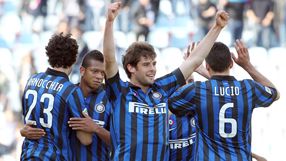 Unbeaten in five games under interim coach Andrea Stramaccioni, Inter, who were 10 points adrift of a third-placed finish and a place in the Champions League play-off rounds when Ranieri left, have reduced the gap to a mere three.

There has even been talk that Stramaccioni, Inter's fifth coach in the last two seasons, could be given the job permanently if Inter manage to qualify.

"That's one way to look at it, but it's always good to set objectives because it's a motivation to constantly do better," president Massimo Moratti told the club's website on Thursday.

Inter have an excellent chance to boost their cause on Sunday when they host already-relegated Cesena at San Siro while their direct rivals all face tough games.

Inter have sneaked up almost unnoticed amid the excitement at the top where Juventus, unbeaten after 34 games of the 38-match campaign, stayed three points clear of champions AC Milan after both snatched late wins on Wednesday.

Juventus, who have 74 points, visit relegation battlers Novara on Sunday while Milan travel to Siena who have moved up to tenth in the table.

Lazio, who are third with 55, visit Udinese, on 52 points alongside Inter after losing 3-1 at home to Stramaccioni's team on Wednesday.

Napoli, fourth with 54 points, are at AS Roma.

Although Inter are unbeaten under his leadership, having taken 11 points from a possible 15, Stramaccioni still had to endure criticism after Sunday's goalless draw at Fiorentina.

"There always seems to be this notion that Inter are carrying this 'original sin'," said Stramaccioni after Wednesday's match.

"I heard things which irritated me and I think the lads responded, especially those who had been particularly targeted like Wesley Sneijder, Ricardo Alvarez, Esteban Cambiasso and Andrea Ranocchia.

"I can only talk about what's gone on since I've been in charge. So I can tell you that Sneijder did everything to come back as soon as possible... it's only right that we take responsibility when we lose, but we're still in it and we deserve respect."

"We weren't awful after Florence, nor are we world-beaters now. From now on, we'll only have Cesena on our minds.

Sunday's game will be big if we want to qualify for the Champions League."

"We're here and we're alive," said Dejan Stankovic. "The boss has said that we can do it and we feel the same way as he does."