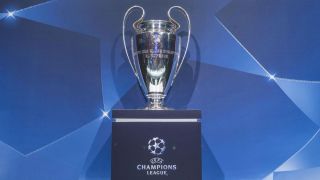 Ludogorets' hopes of reaching the UEFA Champions League group stage for a second successive season were dashed in the second qualifying round by Milsami.

The Bulgarian champions held Liverpool 2-2 in Group B last season and enjoyed a victory over Basel, before finishing bottom of a group that also included Real Madrid.

But they will not be mixing with such illustrious opponents this season after goals from Gheorghe Andronic and Petru Racu gave 10-man Milsami a 2-1 win on the night, and a 3-1 aggregate success.

Serbian champions Partizan are into the third round of qualifying after a 2-0 victory in Gori over Dila, the triumph in Georgia enough to see them progress 3-0.

Zaven Badoyan gave Pyunik a 1-0 victory over Molde in Armenia, but the striker's goal was not enough to see his side through as the visitors cruised into the next round 5-1 on aggregate.

There was drama in Tel Aviv as Maccabi turned a first-leg deficit around against Hibernians, the Israeli title winners running out 5-1 victors on the night – 6-3 on aggregate – to take their place in round three, where they will meet Viktoria Plzen.

After winning their first leg with Ventspils 3-1 last week, HJK only needed Mike Havenaar's second-half strike to seal their progress in Helsinki.

A Tomas De Vincenti effort on the hour proved decisive for APOEL as they snuck through on the away goals rule against Vardar.

The Cypriot outfit will now face Midtjylland, who recorded a 2-0 triumph – 3-0 on aggregate – over Lincoln Red Imps.

They are joined in the third round by Malmo after their 1-0 win over 10-man Zalgiris, while Crusaders' 3-2 victory over Skenderbeu Korce was not enough to prevent them losing 6-4 on aggregate.