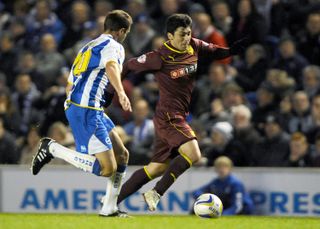 The Italian's effort in the opening stages of the seconed half appeared to roll just over the line before Gordon Greer managed to hack it away, but referee Keith Hill was unmoved.

Forestieri's goal would have put Watford 2-0 up after Sean Murray's first-half stunner, but Andrew Crofts struck eight minutes after the disallowed goal to snatch a point for Oscar Garcia's side.

Watford were aiming to fourth with a win and got off to the perfect start in the fourth minute as Murray picked the ball up 30 yards from goal and unleashed his effort past Tomasz Kuszczak via a deflection off Stephen Ward.

Will Buckley was in fine form down Brighton's right flank and set up headed chances for Jake Forster-Caskey, who saw his effort saved by Manuel Almunia, and the off-target Craig Conway.

Forestieri picked up a booking for a late lunge on Kuszczak midway through the first half and he would be the centre of controversy again two minutes after the half-time break.

The former Italy Under-21 international latched onto Marco Faraoni's throughball and prodded his effort past Kuszczak.

Greer got a touch on the ball, but could not divert it away from goal at the first attempt, eventually clearing but only after replays suggested the goal should have stood.

Watford boss Gianfranco Zola had even more cause to be upset soon after though, Crofts neatly hooking home after the visitors failed to clear a corner.

Forestieri was again denied five minutes from time as his header rebounded back off the post, with Watford forced to settle for a point.