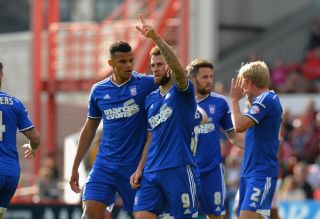 Mick McCarthy's side are two points clear of third-placed Derby heading into the match at Portman Road and will be confident of success given their recent record against the visitors.

Ipswich have won eight of the last 10 meetings between the sides at home and extending that run could see them finish the weekend in top spot.

They will have to be wary of former Town favourite Darren Bent, though, with the striker set to make his Derby debut having joined on loan from Aston Villa.

Steve McClaren is looking forward to seeing the 30-year-old in action and revealed he is likely to feature on Saturday.

"He comes into our squad and adds to the quality that we have got," the Derby manager told the club's official website.

"He is a goalscorer and he's got great experience. You don't lose that because you haven't played games, but he will get that opportunity here."

With Ipswich kicking off early, they will climb above leaders Bournemouth for a few hours at least with a win.

But Eddie Howe's side, who are chasing a sixth consecutive league triumph, will finish the weekend at the summit if they beat a Norwich City side who saw boss Neil Adams resign this week.

The battle at the foot of the table is also tense and two strugglers in the shape of Blackpool and Millwall meet at Bloomfield Road.

Blackpool have collected five out of a possible 15 points in recent weeks, but remain nine points from safety, while Millwall dropped into the bottom three after defeat to Bournemouth.

Wigan Athletic, who head to Birmingham City, are also deep in the mire after one win since Malky Mackay took charge in mid-November.

Three other struggling clubs are on the road, with Brighton and Hove Albion at Charlton Athletic, Leeds United visiting Bolton Wanderers, and Rotherham United off to Brentford.