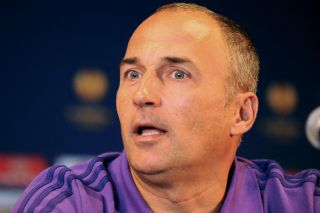 Leeds and Wednesday, separated by two points in 12th and ninth respectively, clash at Elland Road in Saturday's early game.

Stuart Gray masterminded a 6-0 Wednesday victory in the sides' last meeting in January – a club-record victory over Leeds which helped him land the reins on a permanent basis.

Darko Milanic has overseen a 2-0 loss at Brentford and a goalless draw at home to Reading since assuming the Leeds hot-seat, and he has stressed how crucial a derby win is to his team's season.

"It's extremely important," said the former Slovenia captain. "Sheffield play a different game and it will be difficult. They have one day more to regenerate, but we have to do our best."

Frenchman Souleymane Doukara and his Italian strike partner Mirco Antenucci have scored two goals apiece in Leeds' previous four outings, while Wednesday have 21-year-old forward Stevie May high on confidence after he received his maiden senior Scotland call-up on Tuesday.

Leaders Norwich City and third-placed Watford will be expected to emerge triumphant at home to Rotherham United and Brighton and Hove Albion respectively, but the other team on 20 points face an altogether sterner examination.

Nottingham Forest, spearheaded by the division's eight-goal leading marksman Britt Assombalonga, aim to protect their unbeaten record against visiting Ipswich Town, who have taken 13 points from a possible 15.

Mick McCarthy will charge on-song former Sunderland and Celtic attacker Daryl Murphy with inspiring Ipswich to a first away win over Forest in 10 attempts.

Derby County and undefeated Charlton Athletic, who are both in the play-off positions, are at home to bottom-half teams Millwall and Birmingham City.

Wolverhampton Wanderers and Middlesbrough, both just outside the top six, host lowly opponents.

The London outfit have put together three successive wins in all competitions under caretaker-manager Kit Symons, including Wednesday's 4-0 thrashing of Bolton Wanderers.

"That performance and result certainly won't do me any harm," Symons remarked on his hopes of landing the Fulham post permanently. "When I took over in I tried to galvanise the club and get everyone pulling together, and to start winning games, and on both counts it's going pretty well so far."

Bolton manager Dougie Freedman knows anything less than victory at home to Bournemouth could cost him his job, while Jose Riga is also under pressure as his winless Blackpool side host Cardiff City in Friday's game.

Finally, Blackburn Rovers are at home to Huddersfield Town and Brentford entertain Reading in a mid-table duel.