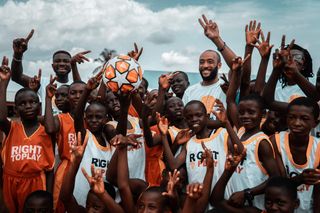 Less than 24 hours after the end of the season Nathan Redmond jetted off.

But there were no sun loungers or beach bars.

A day after scoring in Southampton’s final day 1-1 draw with Huddersfield the winger flew to Accra, the capital city of Ghana, for three days.

And, as an ambassador of international children’s charity Right To Play, Redmond was moved and humbled by what he saw.

From the privilege of the Premier League came the poverty around Accra.

“I visited a village and there were young girls reading poems about their empowerment and how they were being treated by their families,” Redmond tells Press Association Sport.

“There was a drama group who performed a common theme where girls who are 13, if they live in rural areas, are being sent to live with uncles and aunties in the bigger cities and they end up being raped by some of their relatives. It was shocking.

“We were in Jamestown (at the Street Children Empowerment Foundation) in Accra and they were saying if a girl is 13 and doesn’t have a child she is almost seen as an outcast. She gets named and shamed.

“My sister turned eight this week and gosh. In five years’ time how could I picture her being there? Wow. Where’s the education?

“That’s the most important thing. Giving them the education to say that’s not right.

“I can explain it to everyone but once you’re there you can see it in the people who are describing it. The feeling can’t be compared.”

Right To Play operates in 2,600 schools around the world while also working in 52 refugee camps in Ethiopia, Jordan, Lebanon, the Palestinian Territories, Thailand and Uganda.

It works in 15 countries and, having seen their work first-hand, Redmond, who visited three schools during his visit, knows what a difference it makes.

“You see how happy and humble the kids are despite not having more than one school uniform to wear for a year,” said the 25-year-old, clearly touched by the experience.

“I was there while they were having lessons, they had a chalkboard at the front of the classroom which had no windows – just holes in the wall – there are no pens, papers, pencils.

Despite daily adversity, limitations & odds – there are some amazing kids, teachers and programs that are determined to make a change! Another great day with @RightToPlayIntl@RightToPlay_UK 🏆❤️🇬🇭💚🇬🇭💛🏆 pic.twitter.com/txjFCBU1Er— Redz (@NathanRedmond22) May 15, 2019

“They get in groups of five or six and they are doing lessons on the floor with chalk. It makes you want to make a difference.

“There’s a lot of stuff which goes on and you’re thinking ‘wow, you’re lucky to have hot water and shoes without holes in’.

“It puts things into perspective, there were a few times coming back from the schools where we were sitting on the bus and just silent for 25 to 30 minutes, staring out the window.

“It was interesting to see how far the Premier League and football reaches out, they are football and sport crazy and that’s where Right To Play links in.

“Education is a big thing, if you don’t have that it limits you in life, in any aspect. It gives these kids hope.”

Redmond genuinely cares, there is a real determination to help, and he and his family donate monthly.

His nine goals last season raised enough to help potentially put around 300 children into Right To Play’s programme for a year.

All of his strikes came in the second half of the season after boss Ralph Hasenhuttl replaced Mark Hughes in December.

He even scored twice while wearing one-off boots, emblazoned with the Right To Play logo, in the Saints’ 3-1 win over Wolves in April.

“Just £1,000 could put 33 kids into the programme for a year but as personal as it is to get accolades, create and score goals for my team there’s a sentimental value.

“There’s near enough 400 kids in a school and there’s only 16 teachers. Educating the teachers is just as important as the kids, these teachers are a representation of Right To Play.

“If one of the kids need someone to look up to they need that passion and that’s one of the things the teachers had in abundance.”

#MondayMotivation What a week for our Ambassador @NathanRedmond22 Less than 24 hours after scoring a sensational goal for the Saints ⚽️he flew to 🇬🇭 to visit #RightToPlay programmes. 16 May- he was called up to 🏴󠁧󠁢󠁥󠁮󠁧󠁿squad for the #NationsLeagueFinals 📸@ stevenhalliwellproduction pic.twitter.com/kk7lRZ41LU— Right To Play UK (@RightToPlay_UK) May 20, 2019

But, despite his status at home, on the outskirts of Accra Redmond was not an England or Southampton player, he was just someone there to help.

“They knew I was coming but didn’t know who I was, so the team had a bit of a highlights reel with some Southampton footage from this season and when I wore the boots against Wolves,” he said.

“It shows I’m part of the organisation and the Right To Play family. We’re here to spread awareness, educate, empower and give them hope.

“The element of a Premier League player is always exciting for the kids and they were so happy and humble. Their smiles were super-infectious.

“If you smiled, they smiled back, just wanting to high-five and play football.”

On his return last week, Redmond was recalled by England for the provisional Nations League squad ahead of their semi-final with Holland on June 6, with his only previous senior cap coming against Germany in March 2017.

Yet lifting silverware with the Three Lions in Portugal next month was far from his mind.

“Going out there made me think about a lot of things, when I landed I had a bit of time to myself at home, pack and repack,” said the former Norwich and Birmingham winger.

“I just had time to think how fortunate I am. I’m living out a dream for every child, to play in the Premier League.

“In Ghana, some of the stuff cannot be explained until you’re there and speaking to people who live in the cities and villages.

“When you get that eye contact and can feel the conversation, you can’t replicate that.”

Right To Play’s senior communication manager Nimtaz-Tanya Noordin added: “Nathan’s enthusiasm, fun-loving spirit and terrific dance moves put smiles on the faces of all the children he interacted with.

“His visit has made a difference to the lives of all the children and teachers he met and created a lifetime of memories for both them and him.”