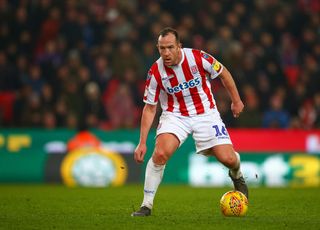 Charlie Adam has confirmed he will be leaving Stoke at the end of the season.

The 33-year-old midfielder announced the news on his Twitter account, adding that he was exploring “a number of opportunities”.

Adam’s social media post read: “Following talks with the manager today it’s with a heavy heart I can confirm I will be leaving Stoke City after seven unbelievable years at the club.

“During my time we’ve enjoyed some incredible highs, most notably finishing a club-record ninth in the Premier League three years running. There were also countless memorable goals and wins along the way.

“I’d like to thank everyone at the club for all they have done for me, especially the supporters – you make the club special. I look forward to saying goodbye properly to you all on Sunday.

“Hopefully Stoke City will soon be where it belongs in the Premier League.

“As for the future, I’m ready for a fresh challenge and to be back playing regularly again at the highest level. I have a number of opportunities and am now looking forward to the next chapter of my career.”