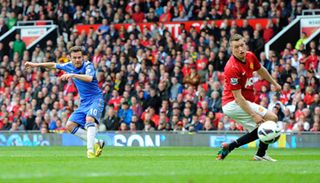 An angled shot from Spaniard Juan Mata in the 87th minute took a slight deflection off defender Jones and beat keeper Anders Lindegaard.

United defender Rafael was sent off in the 89th minute for kicking out at fellow Brazilian David Luiz, becoming the first player that the champions have had dismissed this season.

Europa League finalists Chelsea moved up to third place on 68 points from 35 games, one ahead of Arsenal, who have played a game more, and three ahead of Tottenham Hotspur, who have also played 35.

A win at home against Spurs on Wednesday would effectively seal a top four finish for Chelsea as they enjoy a far superior goal difference to their London rivals.

"It's an important win. We knew we needed to win a couple of games and this is the first one," said Chelsea interim manager Rafael Benitez.

"If we can beat Tottenham on Wednesday, we will be in the top four with two games left to play."

Everton's slim hopes of playing European football next season receded further after they drew 0-0 at city rivals Liverpool in a derby short on entertainment.

Everton, who have drawn 15 Premier League games this season - more than any other side - remain sixth on 60 points.

They have just two games remaining and have slim hopes of securing the Europa League place for the side finishing fifth. Liverpool are seventh on 55 points.

"We want to get Everton back into Europe. As a football club we need desperately to give those nights back to the supporters. If we don't make it, it won't be for a lack of effort," said Everton manager David Moyes.

United and Chelsea, like the Anfield game that preceded it, had much the feel of an end of season clash with United, a 20th English title long already sealed, unable to find a spark and Chelsea showing the effects of a hectic schedule.

In a game of few clear chances, Chelsea's Oscar saw his shot turned on to the post by Lindegaard in the first half while the visitors had a let off after the break when Rafael's shot was almost turned into his own net by Branislav Ivanovic.

United manager Sir Alex Ferguson conceded his side had "taken our foot off the pedal in a big way" since winning the title on April 22.

"There was no real edge to our game. Chelsea deserved to win. We can't complain, we didn't play well enough," he told Sky Sports.

"It was a bit of a lucky goal but I can't make any excuses in terms of our performance."

Everton, who have only won one of their last 13 Premier League games against Liverpool, were aggrieved after Sylvain Distin's headed goal from a corner early in the second half was harshly ruled out.

"I don't want to be a whinging manager but we scored a legitimate goal today - it should have counted," said Moyes.

Centre-back Distin outjumped Liverpool defender Jamie Carragher, playing in his last city derby before retiring at the end of the season, to put the ball in the net in the 56t