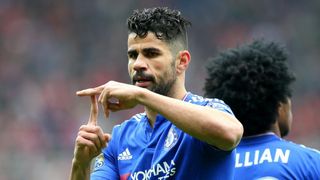 Antonio Conte has moved to deny suggestions that Diego Costa will leave Chelsea to return to Atletico Madrid.

Costa departed the Spanish capital for Stamford Bridge in a reported £32million deal ahead of the 2014-15 season and scored 20 goals as Chelsea claimed a Premier League and League Cup double.

However, the Spain striker was blighted by injury last term as Chelsea's title defence fell apart and the Blues limped to a 10th-placed finish.

Costa's indifferent season meant he was overlooked by Spain for Euro 2016 and Atleti president Enrique Cerezo claimed that talks had begun about bringing Costa back to the Vicente Calderon to reignite his career.

However, new Chelsea head coach Conte has no plans to let the striker return to LaLiga.

"For me it's not about the possibility to go to this team, or that team, we want him to stay with us. He's working very hard and he seems very happy to work with his team-mates and a new idea of football.

"The most important thing is that Diego Costa is a Chelsea player."

Rumours of a potential exit were fanned by the arrival of Michy Batshuayi from Marseille, and the Belgium forward has started work with Chelsea following his involvement at Euro 2016.

"Batshuayi has worked with us for two days, he's in good condition," Conte added. "He's working on the physical and tactical aspect."

Juan Cuadrado has also started pre-season with Chelsea and former Italy boss Conte says the Colombia winger is in his plans after he was frozen out under former boss Jose Mourinho and spent last term on loan at Juventus.

"Cuadrado is Chelsea's player," Conte said. "I like him. He arrived [at Chelsea's training camp in Austria]. and this afternoon he starts training with us."