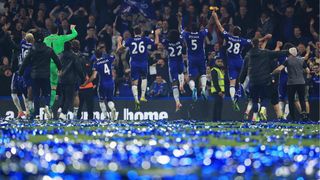 Chelsea broke the record for Premier League wins in a single season by racking up their 30th victory of the campaign against Sunderland on Sunday.

And the Blues were given further cause for celebration at their Stamford Bridge trophy presentation after the home side signed off in record-breaking fashion.

Chelsea thrashed Sunderland 5-1 to seal the record as Willian, Eden Hazard, Pedro and a double from Michy Batshuayi saw them respond emphatically to Javier Manquillo's opener for the visitors.

Chelsea lost five matches over the course of the season, with Liverpool the only club not to taste defeat to the new champions.

Everton were on the receiving end of Chelsea's biggest win of the season, losing 5-0 in west London in November.