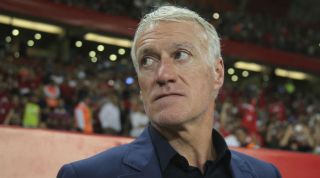 Deschamps revealed that at the last international break, Frank Lampard called him to ask for N'Golo Kante to be left out of the France squad.

The Chelsea head coach's concerns were over Kante's fitness ahead of a busy schedule for the London club.

This time around, Deschamps has anticipated Lampard's call and has sent a message of his own to the 41-year-old.

"Lampard asked me not to pick Kanté at the last rally, if it's still that way... Maybe I'll call him later to tell him it would be nice if you play Olivier Giroud a little bit."

Although appearing somewhat light-hearted, the French coach's jibe had a bit of truth in it. Olivier Giroud is the preferred striker in his France set-up and currently, he isn't playing enough.

The 33-year-old has only played 100 minutes in the Premier League so far this season, with the young Tammy Abraham emerging as Lampard's first choice striker.

Giroud himself commented on the situation in September, warning Lampard he's still hungry.

"Obviously not! I have goals in my head," he told Le Figaro. "I'm here to help the new generation, but the retirement time has not come.

"I’m still hungry and have a lot of ambition. I don’t want to be Chelsea’s No.2 striker, for sure.

"Just because I’m here as an older brother for young people, it doesn’t mean I’m out on the sidelines."

The Frenchman's only goal so far this season came in the UEFA Super Cup against Liverpool.