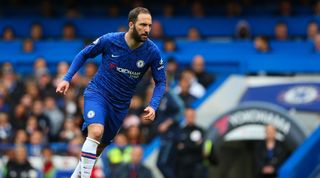 The Argentine arrived at Stamford Bridge in January on a deal until the end of the season, but the Blues have the option to extend the loan by a further season for £15.7 million, or sign him for £31.6 million.

However, the Daily Mail has reported that the Premier League side will not take up either option and the striker will return to Turin after the Europa League final.

The Italian champions aren’t keen to bring him back, but Chelsea haven’t been impressed by the 31-year-old’s return of five goals in 21 appearances and won’t extend his stay in London despite facing a transfer ban.

Higuain’s strike partner Olivier Giroud will be given another season, and the club are set to trigger their option to extend his deal by one year.

Maurizio Sarri’s side secured a third-place finish in the Premier League this season, while they face Arsenal in the Europa League final in Baku on May 29.