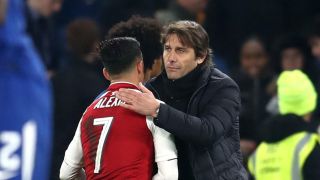 Chelsea were never in the race to sign Alexis Sanchez because they cannot compete financially with Manchester United and Manchester City, according to Antonio Conte.

Sanchez was expected to reunite with former Barcelona boss Pep Guardiola at City but, after interest from Chelsea was cooled by Conte, he moved to United in a swap deal that sent Henrikh Mkhitaryan to Arsenal.

It is believed City backed out of a move for the Chile international due to concerns over the financial package, with the Red Devils reportedly agreeing to pay him £300,000 a week.

Conte said such figures meant Chelsea, bankrolled by Russian billionaire Roman Abramovich, did not get close to beating either of the Manchester clubs in the race for Sanchez's signature.

"We never were in this race. Ever. Especially because, I repeat, one of the reasons was this amount of salary," said Conte.

The Italian says Chelsea cannot afford the significant outlays seen in previous seasons and claims financial disparity means City and United will battle for the title, with the remaining Premier League clubs having to fight it out for Champions League spots.

He said: "I think in this moment there are two teams in this league who are 'top'. They stay there. The others have to fight for a place in the Champions League.

"What happened [at Chelsea] three years, 10 years or eight years ago was totally different. Now I think that we have to fight. We have to fight with our work.

"Last season we won the league and finished with £50million plus [profit on transfers]. No one says this. In the past, this had never happened. For this reason, the situation changed.

"Now I think Manchester United and Manchester City stay there and we have to try and build something important to create a basis, and then make success with our work. Not with money. With work.

"Now it's not simple to think about doing this [finishing above them] because these big teams continue to improve and invest a lot of money.

"Then if you continue to have this type of gap... it's not only here in England. These two big clubs can become seriously dangerous for other teams in the world. These two teams are very strong already and want to invest. Only one or two clubs can pay this type of salary."

Putting in the hours with one day to go before Arsenal! January 23, 2018

Chelsea spent big to sign Alvaro Morata from Real Madrid in July and Conte pointed out the sale of Diego Costa back to Atletico Madrid more than compensated for that deal, but seemingly reiterated that Chelsea will come up short in paying the salaries of elite players.

"For a striker, to spend €55million on a young player like Morata, and selling Costa for €60million, a player older than Morata... that was a good sign for the club," said Conte.

"If you have money you can spend it and have the best players. Otherwise you find other ways to stand up and fight.

"I must be honest, if a player earns a lot of money, it's because he is the best."