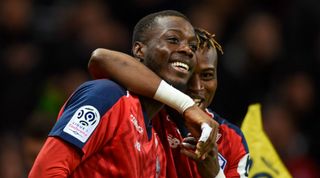 The Blues are readying a bid for Nicolas Pepe should their transfer ban appeal prove successful, according to the Mirror.

Pepe has helped fire Lille to second place in Ligue 1, scoring 19 goals and assisting 11 more in a sensational season so far.

Such form has attracted attention from Europe's elite clubs, and Bayern Munich are thought to be the frontrunners in the race to sign him.

Eden Hazard is expected to leave for Real Madrid this summer with only a year left on his current deal, however, and Chelsea may be virtually powerless to prevent the Belgian from leaving for the Spanish capital.

Thus, Pepe is considered a contingency plan for replacing Hazard should Chelsea's transfer ban be lifted.