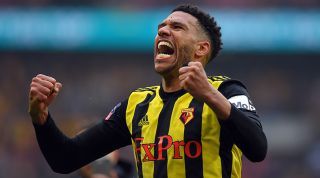 There are two trains of thought with Newcastle United’s transfer business. The first is that the club is brilliant at spotting bargains. Their starting XI against Leicester on Friday evening contained seven players signed for less than £5m, an academy graduate and a loan signing. The cost in transfer fees of the 10 most-used players this season is just £38m.

The second, more persuasive theory, is that Rafael Benitez is an excellent coach who excels in squeezing the most out of players who’ve been signed for a comparative song. And Schar is the perfect argument for that theory.

Signed for £3.5m last summer, few expected the Swiss stopper to become one of the most consistent central defenders outside the top six. Or to be comfortable when both ‘proper’ defending and stepping up into midfield with ball at feet. He’s been a revelation.

But we didn’t quite expect this. Sterling was a far longer price than Mohamed Salah, Kevin De Bruyne and Naby Keita – to name just three – to win the PFA Player of the Year award in pre-season. He’s now the outright second favourite, having contributed nine assists (only three players have more) and 17 goals (only four players have more).

But what’s particularly brilliant is how Sterling has spoken out after racism and mistreatment by the tabloid media, taking it upon himself to lead by example and become an even greater role model for the next generation. Good on you, fella.

It’s fully understandable why Crystal Palace supporters were disappointed that Wan-Bissaka wasn’t in Gareth Southgate’s latest England squad, but they needn’t be. There’s little benefit from being third-choice right-back in the senior squad, and England are blessed with a number of options in that position. A better plan is for Wan-Bissaka to go to Italy this summer for the Under-21 European Championship and experience a major international tournament for the first time. The chance will come.

In any case, that disappointment is an emphatic indication of just how far Wan-Bissaka has come this season. In August, he’d played only seven league games in his career, and was given a chance at Selhurst Park because of an injury crisis. Now he’s an automatic pick at club level and pushing for international recognition.

The biggest myth about Wolves is that they have flourished purely due to the transfer market ambition afforded to them by their relationship with Jorge Mendes. Clearly having Ruben Neves, Joao Moutinho and Raul Jimenez is a wonderful boon, but look elsewhere to see the Nuno effect.

Doherty was signed from Bohemians in Ireland for a nominal fee in 2010. He only became a regular starter in 2014. But under Nuno, Doherty has come of age. He was the club’s player of the year in 2015/16, won promotion to the Premier League in 2017/18, by September 2018 had been named Premier League Player of the Month and is now part of Ireland’s senior setup.

“Doherty has been fantastic. He has a big heart, he goes up and down, doesn’t rest,” said Nuno in February. “It’s a tough job and we are very, very happy with him. I think last season he had a fantastic season and this was a big challenge to prove himself in the Premier League. He’s doing so well.”

NEXT: "For £6m, he must be one of the bargains of the last five years."

The stick most often used to beat Eddie Howe with is that he struggles in the transfer market – but look at Bournemouth’s star attacking performers this season and that argument loses most of its weight. Callum Wilson, David Brooks and Fraser were signed for combined fees of around £14m. That trio alone have contributed 50 league goals and assists this season. Were they all sold this summer, Bournemouth would expect to command fees of 10 times the initial outlay.

Fraser may well be the most likely to depart, with Arsenal reportedly sniffing around the Scottish winger. Bournemouth chairman Jeff Mostyn has publicly insisted that Fraser is not for sale, but that is a predictable response which ensures the player's asking price stays sky high.

And why not? Fraser mixes industry with creativity like few other players in the Premier League can. Only two players have created more chances (Eden Hazard and James Maddison) and only two have contributed more assists (Hazard and Christian Eriksen). What price would those other three players move for this summer, if sold?

He won’t win it, but Javi Gracia has a far stronger case than most to be named manager of the year. The cost to buy Watford’s 10 most-used players this season was just £56m. No other club has outperformed that total more than the Hornets: they rank 15th by that measure, and are 8th in the Premier League according to points per game.

Watford’s success lies in the strength of the team rather than individuals, but Capoue is the foundation upon which their house is built. That rotten time at Tottenham now feels a lifetime ago; Capoue has made more tackles than any other Watford player, and no one in the Premier League has made more interceptions.

For £6m, he must be one of the bargains of the last five years.

QUIZ! Can you name the 50 clubs with the highest average attendances in Europe?

But would we have assumed that Sadio Mané ceded his role as creator (he ranks joint-10th at Liverpool for league assists) and helped share the mantle of goalscorer-in-chief that Mohamed Salah carried alone last season? Probably not.

Last season, Mané scored 10 league goals. This year he already has 18, and is the second-top scorer in the Premier League. And that really is a surprise.

INTERVIEW Ronaldinho: "I was 48 hours from joining Man United... and then Sandro Rosell called"

QUIZ! How many of the 50 Brazilian goalscorers in Premier League history can you name?