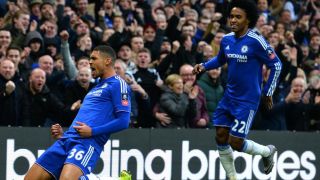 Loftus-Cheek's deal expires in 2017 while Ivanovic is out of contract at the end of this season, although both are reported to be on the verge of finalising extensions.

Hiddink is only set to serve as manager at Stamford Bridge for the remainder of the campaign, having replaced Jose Mourinho in December, but the Dutchman confirmed discussions with the players, who will be coached by his successor next season, are taking place.

"I am aware in the sense that the club is talking [to players about new deal] but furthermore don't have any announcements," he told reporters.

"I am just focusing on the technical part of the short-term future."

While Ivanovic was at Chelsea for Hiddink's first spell in west London, 19-year-old midfielder Loftus-Cheek is enjoying his most prolonged spell in the first team.

Having made his debut in 2014 under Mourinho, Loftus-Cheek scored his first Chelsea goal in the FA Cup third-round win over Scunthorpe United on Sunday and Hiddink is eager to see more of him.

"He has a lot to learn but whenever possible he will have minutes. I think it's good to have a homegrown player and he acts mature. That's okay."

Brazilian teenage forward Kenedy has also featured fleetingly off the bench this term, Hiddink dismissing the suggestion he could leave on loan.

"We have youngsters and I know them better and I have [a] good impression of them. [Kenedy] is one of those who will, at the moment, stay until the end of season," he continued.

"We may need him or give him chances. He came in and started well but then you say it's up and down so that's why they need to play.

"They get lots of experience to practice with the experienced guys. He will stay until at least the end of the season."