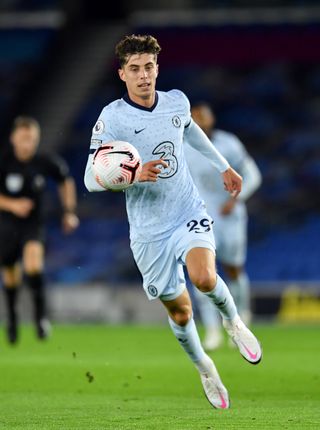 Kai Havertz insists he feels no pressure to justify his £70million price tag at Chelsea.

The Germany playmaker has made one of the highest profile moves of the summer, trading Bayer Leverkusen for Stamford Bridge amid Frank Lampard’s major Blues overhaul.

Havertz could be forgiven for feeling the weight of expectation in aiming to live up to his hefty transfer fee, but the level-headed midfielder dismissed any such concerns.

“Of course it’s a big price tag but I think in football today it is normal to pay these prices,” said Havertz.

“So for me I will not put a lot of pressure on myself because I think I am doing not the best or the worst because the price tag is that high.

“I am trying to focus on football and trying to play my best football here in Chelsea and not put pressure on myself.

Havertz made his Chelsea debut in Monday’s 3-1 Premier League win at Brighton, showing plenty of promise but also understandably battling for rhythm having trained with the Blues for less than a week.

Chelsea will host Liverpool on Sunday where Lampard’s new-look Blues will bid for a more polished performance, with Havertz and fellow new boy Timo Werner doubtless all the more settled after Monday’s Amex Stadium victory.

Aachen-born Havertz has already blossomed into a goalscoring midfielder of genuine class despite his youth, boasting a host of similarities to his new Chelsea boss Lampard.

The seven-cap Germany star grew up watching Lampard in his Chelsea pomp, and now finds himself itching to emulate one of his childhood idols.

“I watched many games of him as a kid, and he was also like the way I play as a midfielder, to go in the box, to score goals and make assists,” said Havertz, of Lampard.

“I loved him as a player, watching him as a kid. He was one of the biggest players in England of his time and for me of course Chelsea always had very big players that I know from watching the Premier League.

“I think that helps a lot to have a manager who played such a long time in the Premier League and national team.

“He can give me tips and I think he will help me a lot to become a better football player, a better midfield player, so I am very excited that he is my manager now.

“For me it’s a perfect step to come from Leverkusen to the Premier League. It is another way here to play football.

“I watched it a lot and for me it was always the best league in the world with the best teams.

“I’m now very happy to be playing for one of the best teams in England, the world as well. I’m actually very thankful but obviously I need a little time to adapt to the league. It’s very different to Germany but I’m looking forward to it and I think on Sunday it will be the first improvement for me.

“I was dreaming as a kid to play in the Premier League and for Chelsea as well, a very big club and one of the best in the world. I’ve always dreamed of playing in a league like that and for me the dream came true very early.

“I’m just 21. Of course I watched the Premier League as a kid, very often with my family and with my parents.

“Now it seems a bit unreal for me and my family that I am sitting here for a club like Chelsea. I’m very looking forward to it and hopefully it’s a very good time for me.”