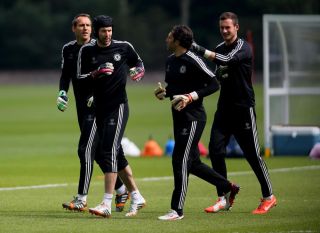 Cech and Terry were both taken off injured in the goalless semi-final first leg at the Estadio Vicente Calderon a week ago, with neither featuring for a much-changed Chelsea side in the 2-0 win against Liverpool on Sunday.

However, the club confirmed that the duo trained on Tuesday, along with Hazard and Eto'o.

Cech was substituted after an early goalmouth collision in Madrid while Terry landed awkwardly on his ankle in the second half, with Mourinho stating at the time that the keeper's season was over and that Terry would only have a chance of playing in the final - if they qualified.

Hazard has not featured since being taken off in the 2-0 win over Paris Saint-Germain and team-mate Eto'o was substituted in the defeat to Sunderland.